Can’t Stop The Browncoats in the Fight for Equality 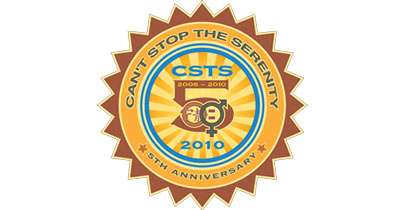 You don’t get much more dedicated than Firefly fans. With only 12 episodes aired prior to Fox’s fateful cancellation decision in 2002, it must seem insane to many that it still generates so much support and enthusiasm.
But it was this devotion, of Firefly‘s fans, creators, and contributors (and massive DVD sales) that enabled Serenity to be released on the silver screen, by Universal in 2005. Proving that you really can’t stop the signal, no matter how much you try to.

In 2006, an event called Can’t Stop the Serenity was born. If you’ve never heard of the project; it’s an international event hosted on a range of dates throughout June – September, at which the movie Serenity is screened. Proceeds from the event go to the charity, Equality Now.

Equality Now was founded in 1992 to work for the protection and promotion of the human rights of women around the world. Working with national human rights organisations and individual activists, Equality Now documents violence and discrimination against women and mobilises international action to support their efforts to stop these human rights abuses.

This year is the fifth anniversary of Cant Stop The Serenity, with about 40 locations and dates confirmed all over the US, UK, Canada, Germany and Australia.

If you’ve never seen Firefly, but have been interested in finding out what the fuss is all about, a screening of Serenity is the perfect way to introduce yourself to the ‘Verse. Despite the TV series, the movie works as a standalone.
In fact, it was how I found about the series, when I sat down in a cinema in Indooroopilly to watch a movie my boyfriend wanted to see – called Serenity. Yes, I admit – I had never heard of Firefly before then! Can I plead that I was young and ignorant? LOL.

Having attended a Brisbane-based Cant Stop The Serenity several years ago, I was saddened in seeing that no one had offered to set it up in little ol’ Brisvegas this year. So, a friend at work suggested we host it.

And why not? Today, I filled out the pre-registration form on CSTS – which is basically, registering intention to host. Let’s see if it’s approved *crosses fingers*! Then, just to locate a city-central cinema interested in giving us a fair price (I’m in communication with several already; no harm in seeing what’s available, even at this stage)…

If you’re no where near Brisbane there is a full event calendar here, listing every host city for 2010 and which dates they’re screening Serenity on.

So take a pic. Do a blog. Tell your friends 😛
Let’s fill these cinemas, watch an awesome movie, and support Equality.