Steven Moffat is Trying to Kill Me 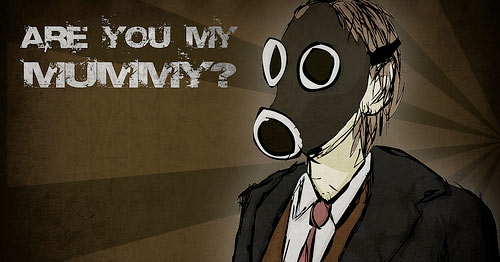 Are you unable to hear the phrases “Are you my mummy?”, “Don’t Blink”, or “Hey, who turned out the lights?” without chills creeping up your spine? Do you shy away from marble statues and libraries with flickering lights?

Good! Then I’m not alone in blaming Steven Moffat for awakening childhood fears I never knew I had. Of course, we love his writing all the more for the emotions his scripts invoke in us. He takes simple elements, everyday objects, and – through nothing but clever writing and subtlety – aims them at that part of the mind that still believes in checking under the bed for monsters.

If you’re lost on who and what I’m referring to, an explanation:

Steven Moffat is a writer who’s long been associated with Doctor Who, and has been a fan himself since he was a child. Not only was he a regular writer on Russel T. Davies’ recreation of the classic sci-fi between 2005 and 2009 (The Empty Child/The Doctor Dances, The Girl in the Fireplace, Blink, Silence in the Library, to name a few), he was the genius behind the 1999 Comic Relief sketch “Curse of the Fatal Death” (which you can watch here: Part 1, Part 2) and wrote a Doctor Who novel called Continuity Errors, published in 1996.
I’m sure I wasn’t the only person who squeed on hearing he was taking the reins as Boss Man of the 2010 series of Doctor Who.

This doesn’t remove the fact that he is trying to kill me. You remember that movie The Ring? Where they die of fear 7 days after watching the tape? That will very likely be me, come the end of the 2010 season.

“The Eleventh Hour” gave us cracks in the wall. I give you now a photo of my bedroom. Laugh at my misfortune. 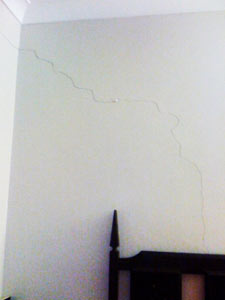 And, while I know this wasn’t entirely his fault, I all but lost it when I saw glasses of half-drunk water positioned everywhere in “The Beast Below”.
Anyone who knows me is undoubtedly laughing right now, but for those out of the loop: watch Signs. Then you’ll get it. Thanks to Signs, I get those chills of fear whenever I see glasses of water positioned around a room. Thank you, Mr Moffat, for lining up all those glasses, just for me 😛

As for “Time of the Angels”? Oh, you do not want to get me started on the concept of Blink Angels materialising out of a television. Good grief on a stick.

Despite my impending fatality – thank you, Mr Moffat, a hundred times over, for injecting the fear, fun and function back into Doctor Who this year. You have made me love it all over again.

Come the end of this season, I may be a blubbering wreck who can’t look at a toaster without screaming, but it will be worth it. For some perverse reason, there’s nothing better than a good scare, and Moffat makes great ones.

Doctor Who: The Complete Third Series

, which contains Moffat’s infamous episode “Blink”, can be bought from Amazon.