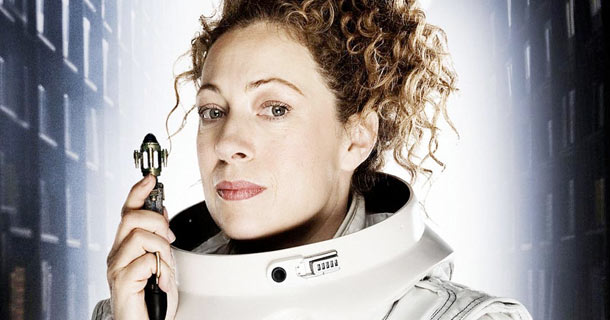 River Song (played by Alex Kingston) first appeared to us in Steven Moffat’s Doctor Who series 4 contribution, Silence in the Library/Forest of the Dead. During that episode, we were lead to believe that she is his future travelling companion and wife. 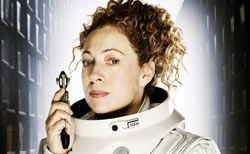 And we believed her.

She knows a lot about him, after all. She has not just any sonic screwdriver, but HIS sonic screwdriver. Something the Doctor wouldn’t give to just anyone! She knows his real first name, something he would have only ever revealed during whatever wedding vows they have in space/time, one assumes.

In Time of the Angels, we learn that she can speak High Gallifreyan, and that she can fly the TARDIS (‘properly’).

We also find out, in a round about way, that she’s not really who we think she is. And that she has killed a man. Someone who she refers to as, the best of men.

So, who is she? I have a theory.
(it might be bunnies…no. Wait. Completely wrong fandom…)

I’m going to put out there that River Song is the 13th Doctor.

…this theory is largely based on Moffat’s 1999 Comic Relief contribution, Curse of the Fatal Death 😛

If you haven’t already watched it – I linked it through on my Steven Moffat is Trying to Kill Me article – basically, through a series of hilarious mishaps, the Doctor regenerates for the 13th and final time as Joanna Lumley, and runs off with the Master 😛
So, why wouldn’t Moffat naturally lead us to this ending? 😉

Ok ok, I’m not purely basing my theory on this, I promise. We also have a few clues along the way – well, clues, or misdirection…

River Song being the 13th Doctor would explain all River knows, and not require many years of marital bliss/lessons in languages/TARDIS-flying etc.

How come he cant tell she’s him? Don’t all Time Lords have a sixth sense for other Time Lords?
Sure, but we don’t know everything about regeneration, particularly for half-time Lords. The 8th Doctor told us that he’s half human…on his mother’s side. Perhaps that is how the Time Lord Doctor could regenerate into seemingly human River Song. While he regenerates male, he’s full Time Lord…if he happens to turn female, he takes on his mother’s genetics structure. Pure speculation of course – but I stand by nothing being impossible in sci-fi!

If all this has any truth, then why say she’s his wife?
It was convenient. She needed to make him trust her. She is seeing their time line from the opposite direction to us/the Doctor, so by SitL, it’s a natural, well-established bit of misdirection, for her.
Allowing wife to be assumed was an instant ‘trust me’ and ‘don’t ask questions’ in one, regardless of whether the Doctor believed her or not. She was clearly someone from his future, and asking questions of course would give away too many spoilers. The Doctor couldn’t have that, could he?

And then, how could River end up being imprisoned for ‘killing’ the 12th him?
The possibilities centre around the 12th Doctor being present somewhere, publicly. Something causes him to regenerate, and he becomes she. Whoever or whatever expects him finds her. When she can’t produce the 12th Doctor, she’s accused of killing him. She’s held for his murder, and loses access to the TARDIS. Explaining why she needed the Doctor to come and get her in Time of the Angels – she didn’t really need him, she needed his ride!

If there is any truth to this, then we know how the 13th Doctor dies already. By saving the minds of thousands; including the 10th Doctor, and Donna. And the memory of River/the Doctor lives on in the mind of the planet library, never dying, with the friends she travelled with on her final journey. Sadness. But, as the Ood told the 10th Doctor, his Song was coming to an end.

This entire post aside – I can’t wait to be proven wrong! I love how complicated and intertwined the story and characters are becoming, so it guarantees we’ll have an exciting ride finding out what’s actually going on, and who River Song really is.

So there you have it – my Swiss Cheese River Song Theory (in that it’s full of holes…).
What’s yours? 😛

Doctor Who: The Complete Fourth Series

, which includes River Song’s introduction into the Doctor Who continuum, and Doctor Who: The Complete Fifth Series

, which reveals some more about her story, are both available from Amazon.