Scott Pilgrim VS The World 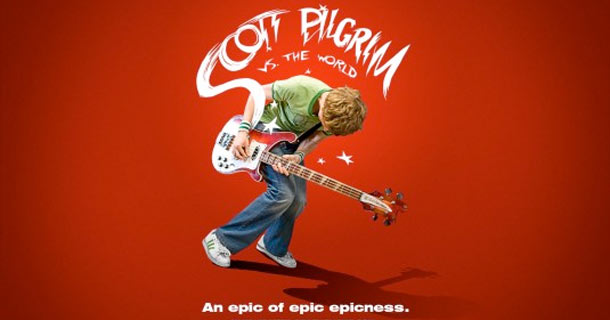 It’s your standard romantic comedy, really. Boy meets Girl. Boy feels alienated by age difference and distances himself from Girl. Boy meets Other Girl. Boy stalks Other Girl, forgetting to break up with Girl. Boy manages, against all odds, to endear himself to Other Girl and is roped into battle with her seven evil exes. Boy duels seven evil exes in a series of vibrant, fast-paced, captioned fight scenes straight from an arcade game. Nothing new, really. But, despite this undeniably stock premise, Scott Pilgrim vs. The World manages to be an entertainingly unique movie. 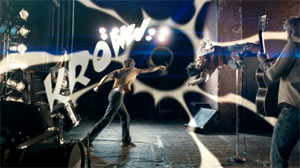 Scott Pilgrim essentially lives in a game. Power-ups and rankings abound. Score enough and you’ll earn yourself a life. Lose enough and you’ll dissolve into a shower of coins—apparently conquered to the death, although nobody ever seems too concerned about the ethical dilemma of your murder. An 8-bit soundtrack plays overhead. Written sound effects explode around you while helpful labels scrawl themselves on anything worth noting. Time randomly slows down, speeds up, skips ahead of itself. And nobody finds any of this odd enough to comment on. Because Scott Pilgrim essentially lives in a game.

Perhaps my favourite aspect of this film was how aware of itself it was. Half the jokes were meta-fictional prods aimed at the film, its genre, and the gaming culture it referenced ceaselessly throughout. There’s no shortage of real-world emotion (relationship issues and personal growth abound), but the film never takes itself too seriously, and its poignant moments are the stronger for it. Scott Pilgrim is a tongue-in-cheek, loving parody of geek culture, set in a world that—despite its inexplicability—needs no explanation. 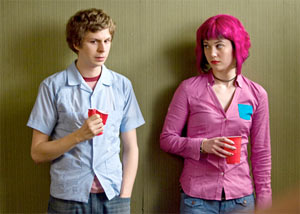 That said, you don’t need to be a gaming geek to enjoy it. The movie is packed with referential jokes, but if you don’t get one you’re bound to get another, and plenty of the puns appeal to a broader audience.

The film’s other greatest strength was, for me, its overdependence on neither effects nor script. Don’t get me wrong—both are excellent. What strikes me is the fact the film is both a visual treat and cleverly written. It doesn’t rely on graphics at the expense of story, nor is it so focused on story it becomes aesthetically dull. Seamlessly coordinated fight scenes and special effects merge with a consistent stream of quips, jokes, and delightful dialogue to make this a well-written and well-realised movie, two hours of absolute fun. Scott Pilgrim, like its namesake, embraces its geekiness and successfully kicks ass.

Scott Pilgrim vs. the World

is available from Amazon here