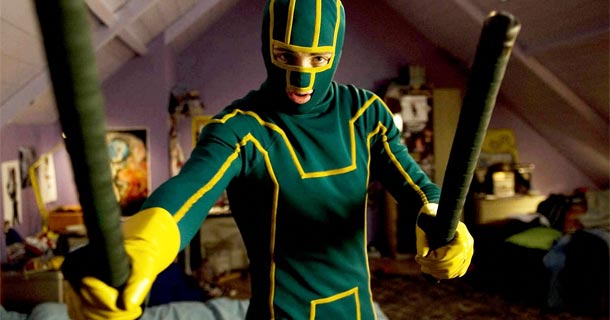 Recently the second part of the Kick-Ass franchise (is it a franchise? Sure. Why not?), creatively named Kick-Ass 2, opened in Australia. I was really excited about it, and the film delivered an entertaining, but, actually heart-warming (stay with me here…) story about people choosing to do what’s right, not what’s easy, in a world gone mad (our world!).

If you’ve never heard of Kick-Ass before – both Kick-Ass 1 and 2 are based on the comic series by Mark Millar, and is known for being extremely violent with some serious swearing. The comic punches out the shocks, portraying, in a way, why there are no real-life superheroes; not only because it hurts, but because it can mess you and your loved one’s lives up in so many ways.
You get beat up as much as the bad guys. You threaten and attack as much as they do, and sometimes even kill. Basing your transformation into a vigilante on revenge? What do you think that level of obsession will do to your mind, or to the lives of those around you? To beat the monsters, do you have to become a monster? 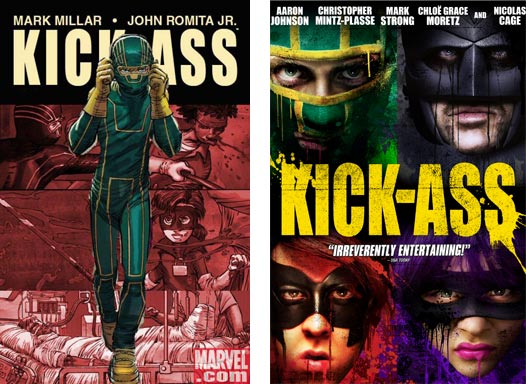 It’s not all dark – there’s smarts and LOLs abound, from both ‘good’ and ‘bad’ guy alike (and I use the words ‘good’ and ‘bad’ loosely. It’s…subjective). There’s some seriously amazing character building, there’s heart-ache, and most of all, there’s bravery.

And that’s what I love so much about Kick-Ass – everything about it is brave. Despite it’s heavy rating, Kick-Ass is one of my favourite superhero, and character films, of all time. Here’s an intro to the first film. 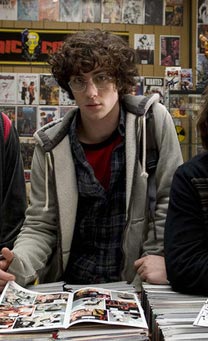 Dave Livewski (Aaron Taylor-Johnson), is an ordinary, geeky high school guy. He lives with his dad, crushes on the vaguely-popular Katie Deauxma (Lyndsy Fonseca), and hangs out with his friends at the comic book store after school.

One day he asks, why hasn’t anyone tried becoming a super hero in real life? A lot of the characters he reads about don’t have super powers – they just know what’s right and wrong, and choose to fight for what’s right. How can that be so hard?

In the world I lived in, heroes only existed in comic books. And I guess that’d be okay, if bad guys were make-believe too, but they’re not.

So what’s stopping people? Unable to answer himself, he resolves to try it out. Dave orders a green, full-body diving suit online, and starts wearing it under his clothes, waiting for the opportune moment to try his alternate identity out on some bad guys.
When he finally does, he gets the shit kicked out of him. 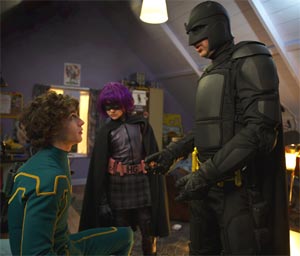 But this doesn’t stop Dave. His first ass-kicking does somewhat give him a super power, too (though I won’t spoil what it is – it’s kind of clever and funny and sad all at the same time).
After he’s recovered, he starts patrolling the city at night – doing good deeds – finding lost cats and the like. The feeling he gets from wearing the suit and doing good, just because he wants to be helpful – the confidence, despite his lack of fighting skills – is like a drug to Dave, and he can’t help but keep going back for more.
Pretty soon a video of him getting his ass kicked but not backing down has ended up on YouTube, and a hero is born. Kick-Ass’ bravery inspires many others to start doing what he’s doing, and his deeds start gaining the attention of both some real-life super-bad guys (Mark Strong) and real-life super heros – ‘heros’ with a purpose, actual fighting skills and weapons, who hide out and seek revenge in a world that’s let them down.

That’s probably about as much as I can explain without giving away a ton of the plot…so here’s the trailer instead, to do it for me:

Both Kick-Ass 1 and 2 may not be for everyone. Hell, one of the introductory scenes in Kick-Ass 1 is a father (Nicolas Cage) shooting his (bullet-proof-vest-wearing) 10-year-old daughter (Chloë Grace Moretz) in the chest repeatedly, because it’s good for her to know what it feels like to be shot (so it doesn’t slow her down when someone who wants to kill her does it). It explores the minds of some really twisted characters, who are twisted for damned good reasons, and despite the violence somehow still makes these characters tremendously endearing.

With no power, comes no responsibility. Except, that wasn’t true.

So even if you don’t usually go for super hero films, or violent films, or comic book adaptions – if you love character pieces, give Kick-Ass a go – you’ll probably be as surprised as I was by it.

Kick-Ass 1 can be bought…pretty much everywhere. You can watch Kick-Ass on amazon instant video here for under $2, or buy the blu-ray of Kick-Ass here.
Kick-Ass 2 is out on DVD in December 2013, but you can pre-order it from amazon in blu-ray here.