Outlander, What Are You! 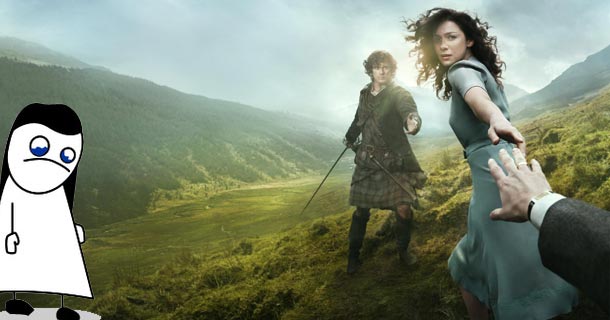 How awesome does this sound; a time-travel love story, set in Jacobite-era Scotland. What kind of show are you expecting when you hear this?

Maybe something a bit timey-wimey? 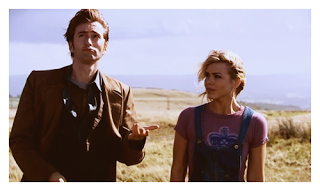 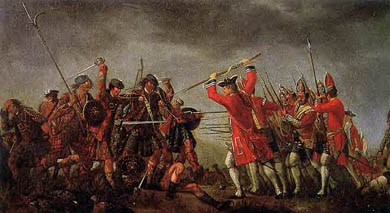 I certainly didn’t expect this: 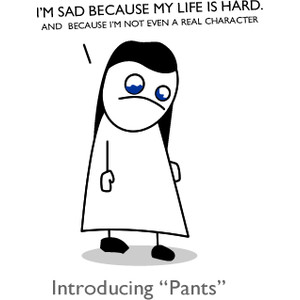 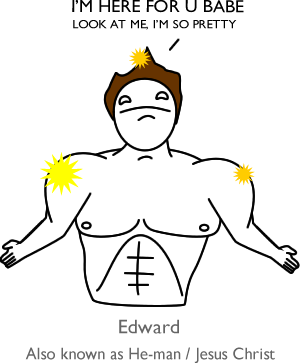 Outlander, based on the novel by Diana Gabaldon which is classified as Historical/Romance/Sci-fi/Fantasy, is somewhere in between these two extremes of expectation VS reality; somewhere between epic awesome, and pointless drivel.

Here’s a very basic run-down of the first episode. So you know…spoilers and stuff.

It begins just after WWII, with Claire Randall (Caitriona Balfe) and her husband Frank (Tobias Menzies) travelling to Inverness for a second honeymoon, to try and re-get to know one another after being separated for the majority of the war; Claire as an army nurse and Frank as some sort of spy.

While in Scotland, it’s Frank Randall’s desire to also research his family history (FORESHADOWING). Claire’s interests don’t lie in history, but in medicine; having recently taken an interest in herbal remedies (CONVENIENT MENTIONING OF THIS SEEMS CONVENIENT).
So while Frank is pouring over dusty old records, Claire heads out to gather herbs, and visits the stone circle that she and Frank spied on this weird, witchy-dancey ceremony taking place at the night before.

I just have to take a moment here – when I saw the stone circles, I actually paused the show and said:

If she uses those god damned stone circles to go back in time, I’m out.

Anyone who knows me will know why I have a hatred for that particular time-travel trope. Anyone who doesn’t know me, I apologise for what will seem like a pointless digression. It’s not pointless, I promise you – it’s one of my all-time pet-peeves; turning stone circles into magical time travel portals is just lazy and balls. BALLS, I tell you.

Back to the first episode, titled Sassenach. Claire, naturally, approaches the stone circle, and naturally, something mystical happens that she can’t explain and she blacks out. 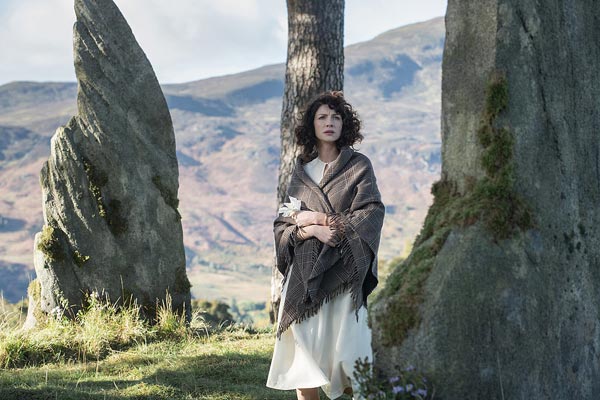 When she wakes, disoriented, she spots what she assumes are actors running through the forest in plaids and carrying guns. She starts running when she realises they’re firing live ammunition.
Claire runs away aimlessly, straight into Frank, her husband, dressed up as a red coat. Her relief at finding him turns to horror as she realises that it’s not Frank, but someone else (Jonathan Wolverton Randall, Captain of His Majesty’s Dragoons to be precise – the very ancestor Frank Randall had an interest in researching in Inverness OMG CONNECTED MUCH), and he promptly tries to assault her.

A Scotsman saves her, then takes her back to a shack they’re hiding out in, where they’re trying to mend a wounded man’s dislocated shoulder. Claire’s fear dissipates at the sight of a patient, and she goes all army-nurse on them, ordering them about and eventually popping the man’s shoulder back into place herself.

Honestly, there isn’t an episode that’s gone by yet where we’ve not:
– seen naked Jamie chest, or,
– fixed a wounded Jamie, or,
– had an opportunity for Jamie to be a big damn hero. He constantly puts his own life at risk for the sake of others – which in smaller doses might be more endearing, but in such frequency feels so forced; like they’re saying LOVE THIS CHARACTER, LOOK, HE IS AWESOME. 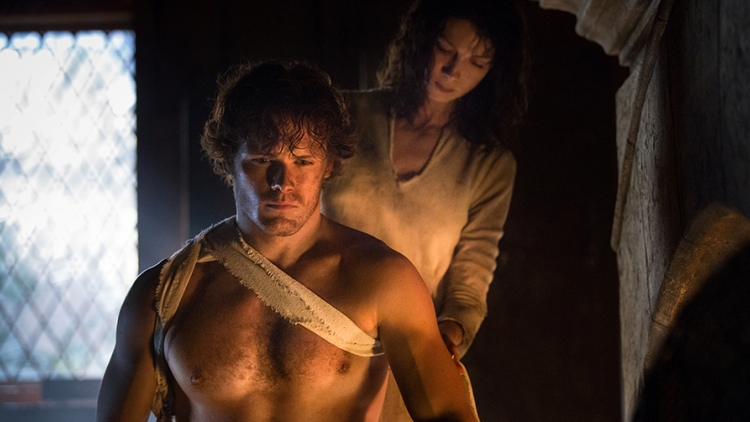 The only other thing you need to know about Jamie is that he’s in hiding, and MacTavish isn’t his real surname – I’m imagining this will be a significant plot point later in the series.

After fixing Jamie’s shoulder, the Scots decide to take Claire back to Castle Leoch, home of the MacKenzie clan. Before they get there, Jamie manages to get himself shot in a small skirmish – another wound that Claire needs to fix – and this constant ability to fix wounds under pressure doesn’t go unnoticed by the Scotsmen she’s travelling with.

Anyway, they get back to the castle, and she assumes her maiden name – tells them she’s Mrs Claire Beauchamp, so as not to be connected to the English Captain Randall, and spins a story that she’s form Oxford, her husband has passed, and that she’s trying to gain passage to family in France. Claire is taken under the wing of the castle cook, Mrs Fitzgibbons (Annette Badland) – 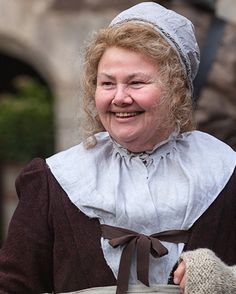 – and told that she’ll be able to get passage back to Inverness in about a week’s time.
But things don’t go as planned, thanks to her healing abilities and medical knowledge. But that all comes to head in later episodes.

I’m really quite vexed by Outlander, hence this article’s title.

On one hand, it has the potential to be awesome. Lots of potential. Amazing, breathtaking Scottish setting, great Brit actors, set in a particularly interesting historical period. But…as we watch it, my partner and I find ourselves throwing out hands in the air and rolling our eyes more often than not.

Outlander will keep us watching, for sure; there’s good to go with the bad – some interesting side characters, a few genuine character-building moments of interest (usually involving Claire being all properly medical – that’s when this character seems to shine).

I quite like the character of Dougal MacKenzie (Graham McTavish); he seems very naturally flawed but at the same time…there’s an honour there, again, believably portrayed. He’s someone who has to make tough or even shit decisions but he just gets on with it. But I’ve also been informed by someone who has read the books he’s not-very-nice character in those. Which vexes me further.

Outlander is proving to be a cause of major frustration, five episodes in, as we are subjected week after week to Claire’s voiceover explaining every move she’s making (completely unnecessary – the actress is actually quite capable of emoting WITHOUT a voice over), and can’t help but feeling that outside of the castle walls, important, historical things are happening, that we’re not allowed to see, because we’re supposed to believe that Claire’s story is…somehow more interesting and important.

Having not read the novel, I can’t say whether this is the way of the book or not. Perhaps we deserve this frustration, for watching a TV series classed as Drama/Fantasy/Romance, while hoping that elements of the Historical and Sci-Fi of the book’s original genres will make an appearance.

Please be better, Outlander. You could be so much better. I want to love you but you give me no reason to…dare I add, as I watch in hope…yet.

* cartoons obviously from The Oatmeal’s How Twilight Works post.