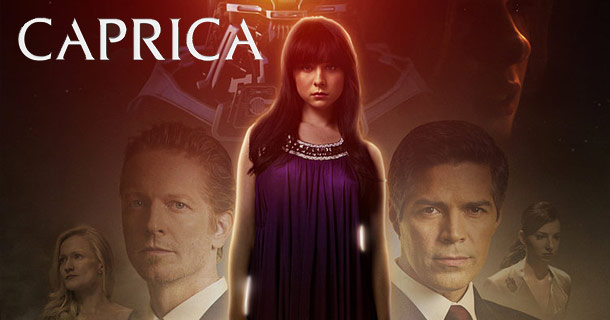 In the TV-Show graveyard, a relatively new and overlooked headstone reads:

Here lies Caprica.
Loved by many,
Yet overlooked and abused.
Dared to be different,
And for that will always shine.

*cough* Erm…sorry about the impromptu uh…poetry, I guess you call it. But when I remember Caprica, it brings with it emotion. It was a show with injustice and fun, fear and love. It was a show to make you think and feel.

What is Caprica, many people ask? Emphasis on the ‘many’, as it seemed to be one of the most overlooked shows of 2010. At least, it had to be, for it to be cancelled in the way it was.

Caprica was a sci-fi TV show aired in 2010, prequel to the famed Battlestar Galactica (which I personally never got in to), and hosted on the Syfy channel. It was produced by Jane Espenson, of Buffy/Firefly/Battlestar fame, who also wrote a few of the episodes.
All of season 1’s 18 episodes aired eventually, after being manhandled around for a while and being replaced with (on the US networks at least), totally un-Syfy-esque shows like WWF Smackdown 😐

Way to go, Syfy. Were you all high when you made that decision?

Caprica was loved by the critics, and had a solid fan base. It was not loved by the Nielsen rating system; the 20,000 US families who decide whether a show lives or dies, as I discussed in my last article: Enough with the Cancelling. My remorse over the loss of Caprica was actually what prompted that article to be written in the first place.
The network listened to the statistic, as they always do, instead of paying attention to the praise the show was getting.

Caprica did have it’s thorns, I will admit. Occasionally you felt as though it was dragging it’s feet. At other times it felt incredibly rushed.
But as a whole, Caprica was a wonderfully tangled web of characters. Some would claim this lead to it’s demise, for being too complicated. But for those of us who like our sci-fi to have a brain, mind and soul? You’ll appreciate it.

One of the many surface things I loved about Caprica was that it was completely accessible to me personally, as someone who has never watched Battlestar (either the old, or the new). It has – naturally – made me more intrigued now, to watch Battlestar some day when otherwise I would have totally overlooked it.

Caprica is set ’58 years before the fall’ (this means something to Battlestar fans, I’m told). Half set on the planet of Caprica itself, and half set in a place called V-world (think virtual reality plus internet plus the Matrix), with a smattering of scenes on planets Tauron and Geminon, the show focuses on two main families.
There are the wealthy, Caprican family – the Graystones.

Daniel Graystone (Eric Stoltz) is the inventor of the holoband – a device that allows people to interact with V-world.
His wife, Amanda Graystone (Paula Malcomson), is a respected doctor.
And their teenage daughter Zoe (Alessandra Torresani) is a genius, and a brat.
Zoe, her best friend Lacy Rand (Magda Apanowicz), and Zoe’s boyfriend Ben Stark (Avan Jogia), all attend the Athena Academy on Caprica, under the (perhaps too close) guidance of the headmistress, a woman the teenagers greatly look up to, Sister Clarice Willow (Polly Walker).
Then there are the Adamas. Joseph Adama (Esai Morales), lawyer, father, and somewhat reluctant Tauron (to the point where they’re introduced in Caprica as the ‘Adams’ instead of Adamas, to hide their ancestry).
Sam Adama (Sasha Roiz), Joseph’s brother – a proud Tauron, and hitman for the Ha’la’tha (a sort of Tauron mafia living on Caprica).
Tamara Adama (try saying that three times fast. I mean – sorry – portrayed by Genevieve Buechner), Joseph’s teenage daugher, and quite the little brat herself.
And William (Willie) Adama (Sina Najafi). I’m told Battlestar disciples will recognise this name. Joseph’s pre-teen son, who through his father’s distraction/negligence, is taken underneath Sam’s wing.

Of course there’s plenty more characters who assist to build the arc of pre-Battlestar history. But at it’s core sits the lives of these two families, with particular focus on their daughters Zoe and Tamara, and how the known universe reacts to a horrible, shocking event that occurs in the very first episode.

Because for all their technology and advances; for all their virtual worlds and spaceships; at the heart of the universe is, as our protagonist Zoe feels, a problem. Youths wasting their lives away in V-world in sordid fantasies (anything from ritual sacrifice, to shooting whoever you want. Who cares, it’s virtual…right?). We are confronted with what V-world is to the universe’s youth in the very first scene of the show. No rules, no morals – because there’s no consequences.
This scene actually makes you want to switch off, from word go. But stick with it. It exists to try and reason the decisions that Zoe and Ben make in the first episode, that drives the entire show. 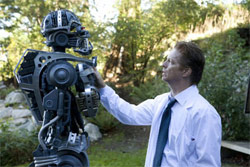 Daniel Graystone, inventor of the holoband, with his latest invention.

Their decisions. In the end, that is what Caprica was really about, in my opinion. Decisions, and consequences. The rich, poor, good, bad, young, old, beautiful, strong, and weak, all have to deal with the consequences of their actions. It is those decisions that make us who (or what) we are, for better or for worse.

Behind this profound theme lies a kick-ass sci-fi that, if you’re not in the mood for introspection, you can just sit back and enjoy. Technology everywhere. Spaceships, space travel, programming, battle robots, building virtual worlds with your will, sepia-toned 50’s-styled RPG’s that nobody knows the point of but plays anyway to find it out – you name it.

Oh, and did I mention that James Marsters has a cameo appearance in four of the episodes? 😉

Caprica is gone now. Cancelled before it’s time, like so many wonderful sci-fi shows before it. But it will never be forgotten, and I daresay the DVD sales will be very high. You can buy season 1 from Amazon in two DVD sets: Caprica: Season 1.0

, which contains the first nine episodes, and Caprica: Season 1.5

; the last nine. I’m sure a box set will be released eventually, containing all of the episodes, too (if it hasn’t been already by the time you read this).

To finish, I’ll ask you to all stand to the Caprican national anthem 😛