Sci-Fi Conventions: The Love is Gone

As I’m based in QLD, my experience of sci-fi conventions is limited to the Supanova Pop Culture Expo. I’ve attended Brisbane Supanova since 2002 and Sydney Supanova once (in 2003).

Brisbane Supanova for 2010 recently passed us by – and, ever loyal to the franchise, I went along with my usual group to get close and personal to the stars and spend a fun day with sci-fi, fantasy, gaming and anime fans. One thing that has always kept me going back is the spirit of attendees: everyone is so happy being themselves. This year reinforced that. The energy and excitement – it’s intoxicating.

But the event itself? This year’s Supanova has left me 🙁 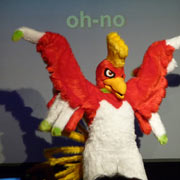 Last year’s was similar – hot and crowded – but this was just mental. And so, again, I’m left wondering why they don’t cope with the numbers by moving the expo to one of Brisbane’s bigger, more convenient venues. Brisbane’s Exhibition Centre, for example, would be perfect.

A reliable source involved with Supanova’s organisation has hinted at two of the issues that surround moving the event: sponsorship and money.
One of Supanova’s major sponsors (who sells food at the event) wouldn’t be able to be present, or sell food, at the Exhibition Centre; the BCEC insist on hirees to use their cafe. And BCEC charges perhaps three times more for hire than the RNA Showgrounds, Supanova’s current location.

Nonetheless, can’t something be done? What’s more important – the will of a sponsor or the safety and comfort of attendees?

As much as we might like to bitch and moan about the circumstances, do the organisers really need to do anything about them? I think, sadly, no.

Supanova Gods: You can have this show wherever you want, whenever you want, and pretty much charge whatever suits you. We will keep coming. Because we love you and we love what you do give us.

I just wish there were a way to attend in comfort. I would happily pay more for this, and I don’t think I’m alone. I pity the fans who waited in the queue for prepaid tickets, 2 hours after the doors had opened. I further pity the cosplayers, in layers of carefully created costumes – some of which took months to create – in that heat. Only to be told that, unfortunately, there wasn’t enough time for their acts due to (unexplained and long) technical difficulties at the start.

We love you, Supanova. But do you really love us?

Have you had similar experiences at your own city’s sci-fi convention/s? Any other Supanova-goers wanting to add their experiences? Melbnova occurred the week after Brisbane’s – how was it? Should we Brisbanites be saving up for a flight down south instead next year?