It’s been a long day at work, and a tedious hike home. There’s dishes that need doing, dinner that needs thinking about, no toilet paper, the bin’s full, and I have two freelance web jobs that really need to be started…

“Oh all right. I’ll just play a couple of minutes.” 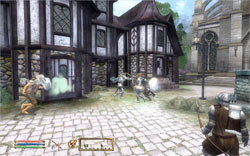 And kick off into Oblivion: Elder Scrolls IV.

Four hours later…all that stuff that met me when I walked through the door still need doing. But it no longer matters. I’ve cleaned trolls out of the mine, found some better armour, delivered a shipment of weapons and increased my restoration skill. I’m well on my way to that Mage’s guild recommendation.

At this point, I realise I’m falling into a trap. One that I’d willingly fall into, every day, given the chance.

Check every barrel. Fulfill every side quest. Somehow be a simultaneous member of the Fighters, Mages, Thieves and Assassins guilds, without getting kicked out of any of them.

Why is it that, years after buying it, this game is still so satisfying – and so compulsive?

Cyd studies this a bit in The Guild (The Guild comic #1): “But with this game I bought, the first thing you do is invent yourself. From scratch. You can be whoever you want.”

Absolutely! The fact that we can, momentarily, be someone else and forget our real responsibilities – that on the other side of the screen, there’s only work, work, and more work to be done? It speaks to our competitive natures, gives us a sense of achievement, makes us believe that we can win, if we just work hard at something.

If the trailer doesn’t get you excited (hello, Patrick Stewart!), then you are dead to me 😛

They’re just pixels, mixed with code that we interface with through some plastic. Nothing I do in Oblivion will make those real-life responsibilities go away. But it makes all those real-life things easier to deal with. It tricks our brains into believing that we’re achieving something great. Even if it’s a delusion – who cares? Whatever gives you a mental boost, right?

Because all work and no play make Min something something…

The Elder Scrolls IV: Oblivion is available for multiple formats from Amazon. The XBox360 version (which I play) is available here.

Leave a Reply to hoodfish