Haven has Solutions to your Troubles 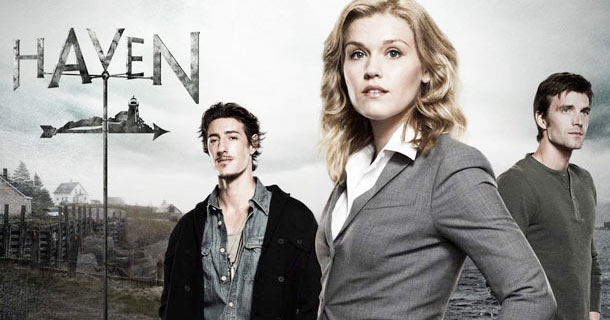 At first glance Syfy’s Haven seems to be standard supernatural fare. Another show trying to recreate the X-files crossed with elements of several other paranormal shows. But look again.

It’s a show about a strange little town called Haven, in Maine (but filmed in Nova Scotia, Canada). Haven attracts odd occurrences that the locals call “Troubles” – the same nature of occurrences that Sunnydale used to attract. The stuff of myths, legends, and general unexplainable.

What does the Colorado Kid murder have to do with Audrey Parker (Emily Rose)?

Our protagonist, the orphaned Audrey Parker (Emily Rose), FBI agent (isn’t everybody? 😐 ) and fan of all things bizarre, is sent to Haven to investigate a case – and after nearly plummeting off a cliff, associating with the local fuzz Nathan (Lucas Bryant) and local er…”scum?” Duke (Eric Balfour), somehow gets roped into sticking around, to help Haven investigate their Troubles.

Her decision to stick it out in Haven could have something to do with the photograph of a woman who looks just like her, taken in the 1970’s, from a local newspaper headline about “The Colorado Kid Murder”. Audrey never knew her parents; perhaps spending some time in Haven will help her discover who they were?
And as for her sidekicks – I mean co-stars, Nathan and Duke? Yeah, they have their own Troubles.

Each week we’re presented with a new batch of Troubles; be it powerful Dreamers, who can kill you while they sleep (with butterflies, no less), or women who have anger management – cross – weather control issues. Underlying each week’s mystery is a deeper arc – what on earth (or elsewhere) is causing these Troubles? And is the woman in the Colorado Kid photograph Audrey’s long-lost mother? Or something more sinister? Why have the Troubles so suddenly returned to Haven?

Underneath Haven’s mild-mannered exterior, lies a pedigree of Superhuman proportions.

It’s based on a Steven King novel

…called The Colorado Kid. Now, I haven’t read this book (have you? What’s it like / is it worth the read?), but Steven King has historically translated fairly well to screen. The writers of Haven have been clever about the connection to the novel; wrapping one of the main story arcs around a mystery that occurred in the show’s past, and connecting it to our protagonist obscurely (at this stage, at least), instead of just copying what occurred in the novel word for word.

You start to Recognise names in the Credits…

…such as Jose Molina (Executive Producer). Does anyone else see that name and think…hmm, why do I know that?
*clears throat* Writer of episodes “Ariel” and “Trash” of Firefly! 😀 Not to mention a writer for Dark Angel and Castle.
And if you watch it and start wondering, why does that Duke character look so familiar? Another Whedon-connection; he’s only Jesse (Xander’s best friend), from the first 2 episodes of Buffy the Vampire Slayer – all grown up!

And they’re not the only two surprises. When you start IMDB’ing the names associated with Haven, you start seeing why this show is worth more than a cursory glance.

It feels like we’ve only scratched the surface with discovering the truth about Haven. We’re only a couple of episodes in thus far, and it’s sure to be an exciting season. With the names connected to it, it promises great things. Not your standard fare, but intelligent, sensitive, and sarcastically funny characters, intriguing cases that have you guessing until the final moments of each episode, and an underlying story arc that will have you questioning every major, minor and obscure reference (and probably, chasing many a red herring) wondering if it’s related to discovering what the Troubles really are.

Preview trailer (though somewhat cheesy) linked below. Definitely worth investigating!

can be pre-ordered from Amazon at the moment, as it’s not available on DVD yet.