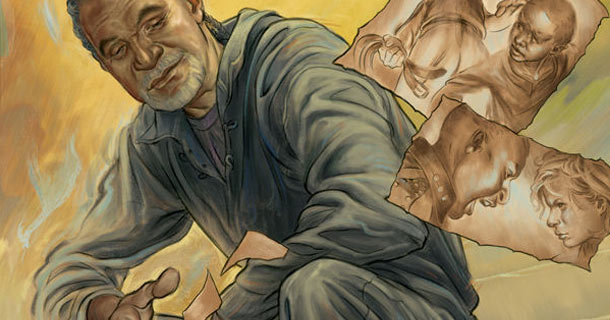 If you live in the ‘verse you’ve already heard – Serenity’s resident man of gods and many secrets, Derrial ‘Shepherd’ Book, will have his past revealed (finally!) this year. Serenity: The Shepherd’s Tale

, written by Zack and Joss Whedon, is set to be released on the 24th November 2010. In it, we’re promised answers.

“Who was Book before meeting Mal and the rest of the Serenity crew, how did he become one of their most trusted allies, and how did he find God in a bowl of soup?” 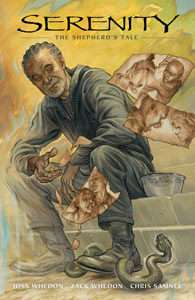 The cover of The Shepherd’s Tale gives us a couple of tantalising images of what’s to come; a serene, smiling Book with cornrows (so we can assume, he’s at Haven in this depiction). He’s stepping on a snake (biblical reference or actual snake?), discarding fragments of what looks like a violent past – an abusive childhood? Some sort of military role? And lastly, who knows – perhaps the relationship that was hinted upon in previous Dark Horse comic, Serenity: Those Left Behind?

We’ve only had tiny truths from Ron Glass in the past as to the true nature of Shepherd Book’s character. In 2007 he revealed a couple of things. Apparently Derrial is not his real name (but the name of a man Book killed). A part of him is artificial – which could be interpreted several ways (is he a cyborg? XD or is this referring to his manner/character?). Most important in that list, in my opinion, is that he’s best known for his greatest failure.

If this failure is one we have heard about before? What great failures are prevalent in Firefly and Serenity that we may glean a hint to Book’s true past from? The Battle of Serenity Valley? The Reavers? River Tam and that wacky school she went away to?

As always – speculation about Shepherd Book leads only to more questions.

So let’s theorise. Who do you think Shepherd Book is? What theories are out there, prior to The Truth being revealed?

He was the first owner of Serenity

In Firefly episode “Out of Gas”, we are shown a flashback sequence of Mal purchasing the abandoned Serenity from a shipyard. We can take from her abandonment that she’d had a previous life, and probably quite a difficult one, if as a second hand ship she’d been left to the sidelines of the yard. In the very first episode of Firefly, “Serenity”, when we first meet Shepherd Book, he tells Kaylee that he has sailed on a Firefly class transport in the past.
This is a long shot – but hey. It could be why he felt drawn to her on Persephone.

He designed the Firefly-class ship

This is going purely on the statement of being known for his greatest failure. Many believe that Firefly-class ships are junkers and outdated, but everyone knows of them. Perhaps again this is why he was drawn to her in the first episode.

He worked for the Alliance

This one’s pretty much a given, unless all the current hints have been intentional red herrings. How else do you explain the no-questions-asked medical attention he receives, upon flashing his ID card to members of the Alliance in “Safe”?

He did something naughty in the War

And so his travelling on Serenity is his form of repentance. He makes himself live what he was responsible for causing; which also could explain why he manages Haven on a border planet in the film. What if Book was responsible for preventing the Browncoats from arriving in Serenity Valley? By being an efficient tactician, he caused a massacre. This would explain why he knows so much about fighting, guns, tactics. Perhaps this is also Book’s greatest failure.

He was an Operative

Do you see how the Operative in Serenity, and Book (again in “Safe”) are given similar treatment, when their ID’s are presented to people? Immediate, unquestioned action.
With the Shepherd’s knowledge of Alliance protocol, combat, and a number of other military-type things that a standard shepherd shouldn’t know, could he have been one of the Alliance’s secret, no-named operatives, sent on assassination missions of the highest priority? Could this also explain why he has taken the name of a man he killed – because as an operative, he was nameless? Was the original Derrial his final mission?
This may also explain the volatile statement River catches from his mind in “Objects in Space” – something about not caring if they’re innocent or not – as an operative, he was just doing what he was told to do.

What do you think?

At least the truth is on it’s way. Bring on November 24th, I say.

is now available to buy from Amazon.