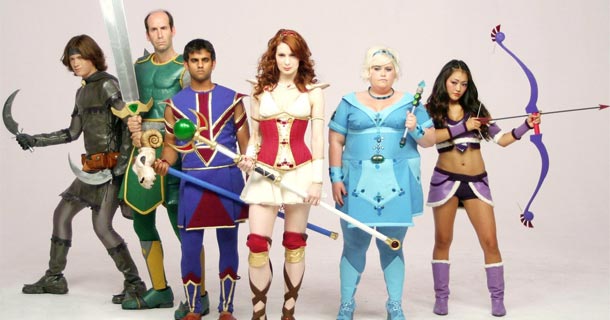 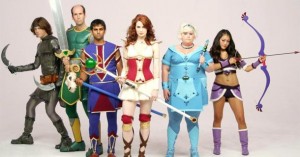 Felicia Day is my hero. If you’ve not seen The Guild already, but live in squeedom, then you’ll know her best from Doctor Horrible, Buffy and Dollhouse. Not only is she wonderful in every acting role we see her in, she seems to be – from her online presence – a totally lovely and uber-clever person – always online answering questions from fans, blogging and tweeting with both wit and brightness I only wish I had. My gushing over Ms Day herself aside…

In 2007, she created a webseries called The Guild.

Filmed on a budget (supported by donations only for its first year), and presented online, The Guild follows Cyd’s adventures in an MMO – “The Game” (based on but never directly mentioned as being World of Warcraft) – as she meets her online Guildies, in real life.

The Guild creator and writer Day is Cyd (AKA Codex) our realistically portrayed and gorgeous geeky girl (AKA Cleric / Healer). Together with the pathalogical guild leader Vork (Jeff Lewis), stalking-tactics Zaboo (Sandeep Parikh), negligent breeder Clara (Robin Thorsen), geek-goddess Tinkerballa (Amy Okuda), and obnoxious pubescent Bladezz (Vincent Caso), they are the Knights of Good. We follow the team united by their love of The Game, as they battle through real life, rival guilds, rampaging mothers, and rent payments.

And it is hilarious. It covers all your usual gamer stereotypes, in a faithful, but somehow more endearing than affronting, way.

There are many levels to love about The Guild, but one of the elements I really enjoy is the light it casts women in. I don’t know if this was intentional or not, but hey, it works for me! That we can be geeks, awkward, nervous, obsessive, sometimes even brainless and bitchy, but still intelligent, talented and genuinely good people. Don’t get me wrong – The Guild‘s not a study of female equality in what’s assumed to be foreign territory. If anything it feels more equal than any other comparable productions. And of course, as gamers, guys and girls are equal and it’s really never dwelt on. Just something I’ve liked about it *shrugs*.

You don’t even have to be a gamer, in order to enjoy it. I’ve never played WoW. But if you have ever made a friend on the internet, you will relate to it!

Season 4 has just started, and can currently be watched in several locations – watchtheguild.com, bing and xbox live. They’ve announced that it will be released on iTunes and YouTube later on this year.

Previous seasons of the Guild – 1 through 3 – can be watched on the official watchtheguild.com site, their YouTube channel, and be purchased and yours forever from amazon, with Season One

Next time you’re bored / procrastinating online, just do yourself a favour and check out the first episode. It’s only four minutes long.
I can guarantee you’ll be watching the rest of the episodes in the same sitting. Then watching the songs (Do You Want To Date My Avatar and Game On). Then buying the comics (which covers how Cyd started playing and the Knights of Good’s formation).

As a matter of fact, you might find watching The Guild is as obsessive as playing The Game.

* apologies to those who haven’t watched Commentary! The Musical.