Interstella 5555: A Mu5ical Anime and 5tory of Fandom 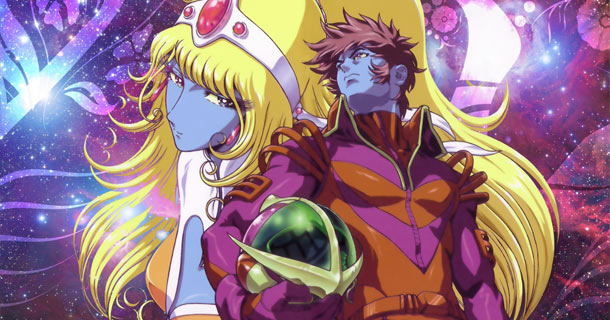 Imagine for a moment that you are in a band. One of the most successful and artistic disco / house bands on the planet. You have made it big, sold millions of albums. You’re gradually ticking off all of your life to-dos. Next on the list?

Work with a childhood hero.

French ‘robot’ duo Daft Punk, while recording their 2001 album Discovery, decided it was time to cross this to-do off their list. They didn’t just want to release Discovery as a CD of disconnected songs and unrelated video clips. What if they could release an entire film, with each song being a new chapter in the story? They just needed one special person, to make their next to-do a reality; their childhood hero, Leji Matsumoto. 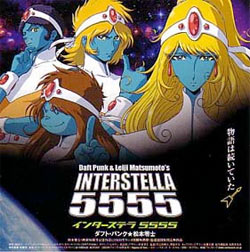 Inspired by the anime from their youth – such as Matsumoto’s Galaxy Express 999 – Daft Punk wrote the outline to their story, went to Matsumoto with the idea and the album, and got him on board as visual supervisor.

Interstella 5555: The 5tory of the 5ecret 5tar 5ystem became a reality and the result is a fun, heart-warming mix of funky tunes and and gorgeous 1970’s-style anime – containing, instead of any dialogue, Daft Punk’s entire Discovery album. You’re probably already familiar with some of the songs from this album – “Harder, Better, Faster, Stronger” and “One More Time” – as they’ve gone on to become independent club classics and fodder for rap-artist remixes, that are still used to this day.

Regardless of whatever associations and uses the Discovery singles have picked up over the years, Interstella 5555 is sci-fi to the core. The movie begins on a planet of tall, talented blue people (some would say, the “original” Pandora / Na Vi / Avatar), four of which are in a band, playing a concert to thousands of happy, dancing fans. As “One More Time” draws to conclusion, we roll straight into the next song – “Aerodynamic” – while the band itself is attacked and drugged by a team of mask-wearing, paralysis-arrow-shooting space aliens. The four band members are kidnapped and taken to a galaxy far, far away…

Enter our hero, Shep, with the song “Digital Love” as his intro. He’s sent a distress signal from the people of Pandora Blue Planet, and – being in love with the gorgeous blonde lead singer of the band, Stella, races after their alien captors.

Our hero crash-lands in the forest, on the planet they’ve been taken to. Our favourite blue-skinned band are transformed, and have mind-control devices installed. The villain of the piece appears; his evil plan is revealed (cue much muh-huh-huh-ing)…
This transformation process is amazing and if you don’t watch the entire movie, you should at least check this part of it out – to “Harder, Better, Faster, Stronger“. 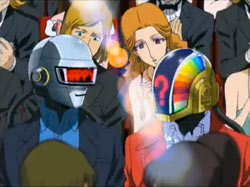 I won’t spoil any more for you. There’s a total of fourteen wonderful songs incorporated into the movie. Through both excellent animation and clever music synchronisation, we live, laugh and lament – and the whole experience leaves you with a wonderfully happy – yet anime – resolution. I think what I like most about it is that you can tell the piece has been loved. Daft Punk had this made, not because they wanted to sell more albums – Discovery had already been released for 2 years prior to Interstella 5555‘s release in 2003. They made it because they wanted to create something beautiful, with their childhood hero.

Even uber-cool arty French house bands consisting of robots have their fandoms.

You can watch Interstella 5555 on youtube – I’ve embedded the first part of the movie (featuring “One More Time”) below, and then listed the youtube links to the other parts (separated by song) below that.

. Not only will it take you directly to the information page about Interstella 5555 on Amazon, but a percentage of your sale will come back to omg-squee for referring you (and any money raised will go straight back into omg-squee’s running fees 🙂 )