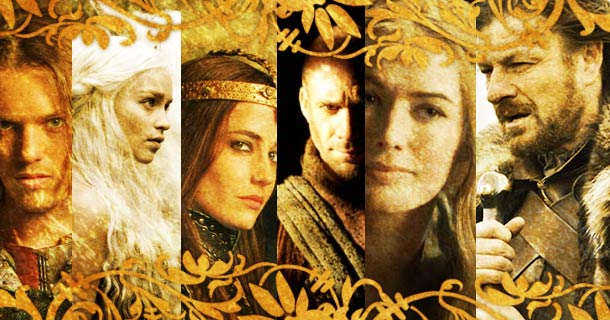 The TV world seem to be asking us to jump on their next genre bandwagon; Fantasy. Magic, Maidens, Madmen, Mystery and Medieval garments.

I’m not saying it’s the first time fantasy has poked it’s head up on a screen of course – you have your Hercules and Xena, Heath Ledger’s Roar, Legend of the Seeker, and a ton of others, to be sure. Fantasy has always existed on television, and always seems to be missing something vital – the enrichment and intimacy that comes from reading a fantasy novel. The other thing that it’s usually missing, is ratings.
But I love fantasy – of the reading, and the gaming kind – and so I’m interested to see what gems, or disasters, come into being now the visual mediums have started producing, and more importantly, started mass-marketing fantasy to us.

What I’m interested in looking at in this post is the rise of a very specific formula to ensure the previously-considered dull fantasy story is a success with those who would have called it dull to begin with (ie, the general populace), plus highlight some new, very watchable fantasy shows that have recently begun to air. 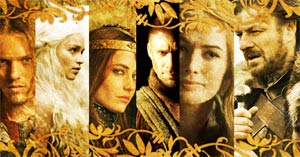 Arthur, Daenerys, Morgan, Merlin, Cersei, Eddard. The young and edgy; plus the cult veterans - the major components of the TV Fantasy formula.

IMO the fantasy genre seemed to gain a bit of a foothold in television a few years ago with the BBC’s Robin Hood (2006); jokingly known (okay, perhaps only to me) as Robin Hoodie. This series took the tried and tested Robin Hood legend, and retold it with a younger, edgier cast (Jonas Armstrong, Lucy Griffiths, Harry Lloyd) and a few big names with bigger voices (Richard Armitage, Keith Allen). It was original, funny, enjoyable and a huge hit.
Until season three; that decline has been covered in my other post, What’s the Story, Robin?

Then there is BBC’s Merlin (2008), which can be explained as a crossover between the legend of King Arthur, and Echo Beach. There is a definite soapie feel to Merlin – and perhaps this is why it’s up to it’s forth season – they’ve found a recipe that works. The creators took a fantasy legend, mushed it up to fit into the teen-drama template, threw in a bit of adventure and added some shoddy special effects on the side. It has your younger-edgier stars (Colin Morgan, Bradley James, Angel Coulby, Katie McGrath) and your big’uns (Anthony Head, Richard Wilson, Michelle Ryan and John Hurt). For many, Merlin ticks all the boxes.
If you couldn’t have guessed from that (probably quite unfair) mini-review, I don’t care for Merlin, but I know plenty of fantasy fans who do. And I certainly don’t hate it; quite the opposite. I appreciate what it does for the genre. It just isn’t quite my cup of tea.

So with these two British shows, we see the formula emerge. Take one fantasy-based tale, add some young folk, some beloved cult veterans, mix in a pinch of epic orchestral music, remove the ye-olde from the dialogue and make the characters vocabulary accessible to Gen-Y. Voila; you’ve got a few years on the air to show the world your fantasy is worth a second, maybe third helping.

There’s two new TV series in particular that have emerged very close to one another, that fit the formula and that I’m keeping an eye on; Camelot (by Starz), and Game of Thrones (HBO based on the George R R Martin fantasy series, A Song of Ice and Fire).

Unlike Robin Hood and Merlin, Camelot and Game of Thrones seem to be aimed at a much larger, perhaps even older audience. There’s more murder, more blood, more sex. Fewer morals, less equality, less idealism, and less hope. Despite these hooks to generate more first-episode interest from their varied target audiences, the stories and some of the characters are fascinating and worth enduring the bucketloads of drama for.

Camelot is set in…take a guess! 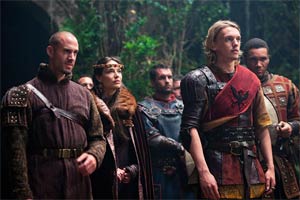 It stars the young Jamie Campbell as Arthur, Peter Mooney as Kay (Arthur’s ‘brother’), and Tamsin Egerton as Guinevere; plus the iconic Joseph Fiennes as Merlin and Eva Green as Morgan. James Purefoy visits for a few episodes as King Lot.
(Fantastical legend, check! Younger edgier cast, check! Cult veterans, check!)
The show takes all of the King Arthur legends we’re familiar with, and puts an original spin on them. Vastly original, to be honest. You start to wonder with this version why Merlin didn’t focus his energy on the wonderfully powerful, driven and mislead Morgan, and leave silly Arthur to shag whoever he wants in the barn where Merlin found him. We’re fed interesting twists on aspects of the legend, such as the Sword in the Stone and Excalibur, and new insights into Merlin and Morgan’s characters.
Fiennes makes for an extremely commanding, striking Merlin; shaved-head, exuding power, warrior-like – more a fighter and manipulator than the aged wizard we’re used to hearing about in the legends.
And Green’s Morgan is enchanting; with such a vast range in such a short time for her character. Constantly at war with everybody else, especially herself.
The soundtrack is epic (check!) and the locations befit a medieval tale adding to the atmosphere ideally. The Sword in the Stone scene was perhaps the most spectacular rendition of the legend I’ve ever seen/read/heard of.
This isn’t one to watch with the family, though; I’d put it at an MA+ rating, if not R.
Camelot began a couple of weeks ago, and is, at the time of writing this post (late April 2011), up to episode four. Seek it out. 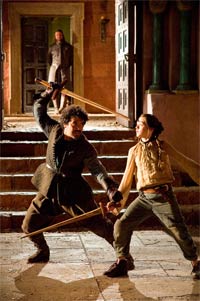 Game of Thrones, based on George R R Martin’s book of the same name, started only this week to raving reviews. After huge ratings it was renewed for a second season almost instantly.
It stars Richard Madden as Robb Stark, Kit Harington as Jon Snow, Harry Lloyd (of the 2006 Robin Hood/Will Scarlett fame) as the vile Viserys Targaryen and Emilia Clarke as Daenerys (all young/edgy – check!), plus Sean Bean as Eddard Stark, Mark Addy as King Robert Baratheon, Lena Headey as Cersei Lannister and Jason Momoa as Khal Drogo. Don’t forget Peter Dinklage (of Death at a Funeral fame), as Tyrion “the Imp” Lannister (check!). Oh, and did I mention, Jane Espenson is one of the writers?
I haven’t read Martin’s Song of Ice and Fire series, and so unfortunately I can’t post a balanced review based on how closely the TV series is matching the novel, but I can say this; the TV show has it’s hooks and sinks them into you immediately. It has all the intrigue and allure you would expect of a fantasy novel.
So far, we’ve had an altercation with some zombie-like forrest dwelling folk, spent some time at Winterfell with the Starks, found direwolves (HUSKY PUPPIES. There’s MY hook!), met the King, and his Queen and her (er…) family, had a beheading, climbed a castle, and sat through a barbarian wedding. A lot went on in that first episode, and who knows where it’ll lead (…probably those who have read the book, actually)?
Again this is an MA+/R rated show. Sex, violence, nudity, course language. It’s HBO; apparently these elements are normal, for them.

After seeing one episode of Game of Thrones, I’m itching to read the book, despite feeling awkward about the lack of strong female characters thus far into the show (and the thought that, just perhaps, the book is exactly like the TV show). I’m hanging out for the next Camelot episode, despite having no interest in the drama surrounding Arthur and Guinevere’s relationship; I want to find out more about Morgan and Merlin, IMO the two most interesting characters in the entire piece.

The drama, nudity, violence – they all have their place in the formula, even if only as a garnish – a marketing-driven garnish. It ensures that the shows survive the Ratings Game. It hooks a larger audience in at the first episode.
It means we get more fantasy. A proliferation of fantasy in popular culture can only be good for the genre.