It’s time to talk about Skyrim 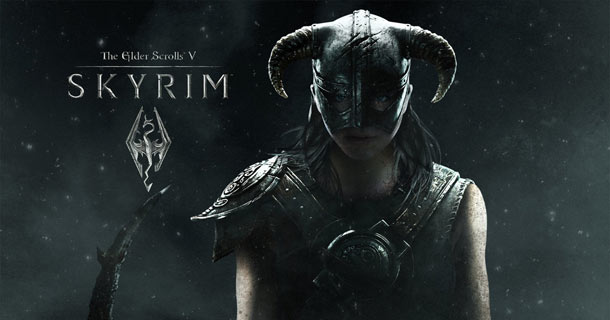 A few years ago, I wrote an article about the Elder Scrolls IV game, Oblivion, which at the time of writing, I’d become quite obsessed with. It was brilliant to be able to forget about the world for a while, and give in to Gamer OCD (which is also defined in my Oblivion post).

On 11 November 2011 (11/11/11), Bethesda released the Elder Scrolls V game, Skyrim, into the world. I was aware that it was on its way, but I’d largely ignored the build up to its release, as “Real Life” didn’t allow time for games any more. Or so I thought.

A part of me I’d forgotten existed (since Oblivion) pushed its way to the surface and took control of me. When I regained consciousness, I was standing outside the shop with my own copy of the game (for XBox 360) and a receipt. The soul of a dragon had woken and I was ready to Fus Roh Dah my way through whatever the Nine Eight Divines threw at me.

Skyrim takes immersion to a whole new level. Set about 200 years after Oblivion, you start your journey in the province of Skyrim; the harsh, wintry region north of Cyrodiil (where Oblivion was set), populated by the Nords – think, Vikings. Skyrim is in the middle of a civil war between the Nords and the Imperials (of the Empire, from Cyrodiil – think, Roman legion). The Nords are lead by Ulfric Stormcloak, Jarl of Windhelm, leader of the rebellion, who believes that it’s his responsibility to push the Empire and any who aren’t Nords the hell out of Skyrim. They are also pretty pissed that the Empire has outlawed Talos worship; a demand forced on the Empire and thus applied to Skyrim by the Aldmeri Dominion (the High Elves/Thalmor who nearly sacked the whole of Cyrodiil) that it wasn’t right to worship someone who was once a lowly human. The Empire/Imperials fight because they must, and believe that Skyrim is and always has been a part of the Empire, and is not just for the Nords.

All of this happened before the game begins. You start your journey as a prisoner on a cart, being taken somewhere down a winding, steep road through the forest by the Imperials, with a bunch of other prisoner Stormcloaks (the soldiers of Ulfric Stormcloak’s rebellion). In the cart, among others, is Ulfric Stormcloak himself, who is bound like the rest of you, but also gagged, as he possesses The Voice – a frightfully powerful way to project your voice as a weapon. Ulfric is famed for using The Voice to kill the High King of Skyrim, Torygg, as part of his claim on Skyrim.

After some small-talk with the other Stormcloaks and a random horse thief who can’t believe he is where he is, who all make it obvious you weren’t caught as one of them, you are unloaded from the prisoner cart in the town of Helgen. To be executed, then and there. An Imperial officer marking off names of those to be executed notes that you aren’t on the death list, and you get to choose who you’re going to be.

Perhaps the most fun, but difficult part of starting any decent RPG.

The character menu gives you a ton of choices. 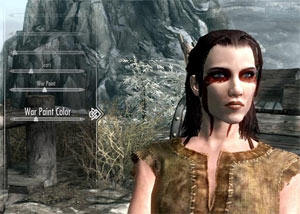 You can be male or female, and one of many races; Nord, Imperial, Redguard, a variety of Elves, an Orc, Argonian (lizard-people), Khajiit (cat-people). You can customise everything, from facial structure, to build, to hair and eye colour and style, to warpaint, scars, dirt and complexion, to the height of your cheekbones and the space between your eyes. Every time I restart (and I’ve built about six characters now), no matter how quick I tell myself to be, this takes ages, because it’s fun.

Once you are defined, and named (more careful consideration/research required for those of us with Gamer OCD – character name should suit the race you’re playing right? So Roman-esque names for Imperials, Viking names for Nords, etc), you’re back in the action – the horse thief has bolted and been taken out by archers; Ulfric Stormcloak has been read the charges against him by General Tullius of the Empire; the beheadings have begun; and you’re next. You shuffle forward to the chopping block, the previous Stormcloak soldier’s head in the basket in front of you, and his headless body to your side. In the distance, there is a foreboding noise, like an echo of a scream.
You kneel, and turn your head to the side, awaiting the executioner’s axe.
The ground (/screen, and controller for 360) begins to shake. The executioner raises his axe.
An enormous, dark shadow looms overhead, and lands on the Helgen fort watchtower. The earth quakes and shakes again.
The shadow screams at you, shooting fire from its maw, directed straight at you. And all hell breaks loose.
A dragon. 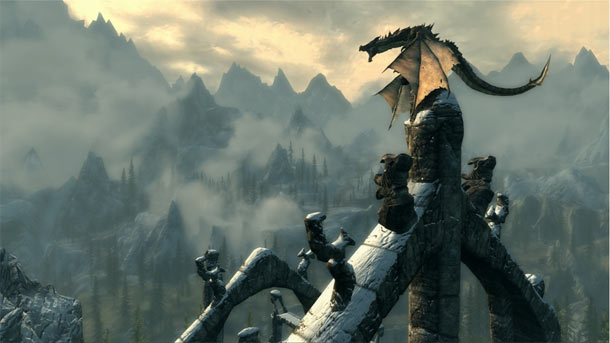 Like the Elder Scroll games before it, Skyrim is not simply about the single thread you are first introduced to – in Skyrim‘s case, dragons and the war between the Nords and Imperials. There is so much more than that. The reason I’ve created six different characters is because the game changes which options are available to you, based on the choices you make as you go along. While the majority of quests do ultimately bring your character to the same conclusion, there are several big, game-changing decisions you need to make throughout your play through, and in the interests of Gamer OCD, when you want to see the whole game, you need to start it several times and choose the other options.

You can become a fighter with the Companions in Whiterun, a Mage with the much-despised College of Winterhold, part of the Thieves Guild of Riften, an assassin with the Dark Brotherhood, based outside Falkreath. You can become a werewolf, a healer, an illusionist, an archer. You can enchant weapons to sap energy from opponents or enhance them with destructive charges. You can become a vampire and blot out the sun with blood-tipped arrows, or join the Dawnguard and fight to stop that from ever happening (for my Dawnguard playthrough, I created a blonde Nord called Buffy – yeah, I amuse only myself, I know). You can lead either the Empire or the Stormcloaks to victory in the civil war. You can own houses in every Hold, three of which you build yourself from a plot of land you buy from the Jarl of the Hold. You can adopt orphan children (Sophie in Windhelm breaks my heart), and get married (after evading the marriage option for a while – because in my head all my characters were too wild/free to want to marry – I finally gave in, and had Cali Falconsfyre (my most recent build) marry the protector of Riften herself, Mjoll the Lioness. That’s another awesome thing about Skyrim – MM/FF/MF relationships are a non-issue – you marry whoever you decide to marry regardless of gender). You can smith, wear and sell your own armour, jewellery and weapons. Mix brilliant potions and deadly poisons, from alchemy ingredients you find during your travels. You can adventure alone, or take followers with you, who fight along side you (and carry all the stuff you find). You can delve deep into the Dwemer ruins that litter Skyrim, reclaiming artefacts from the once-thriving, mechanical cities built long ago by the Dwarves. And you can fight the dragons that plague the towns, learning the ways of The Voice, to fulfil your destiny as Dovakiin (in the language of the dragons); the Dragonborn.

There are a hundred more things I’m forgetting. This game is immense. I’ve been playing it fairly consistently for over two and a half years now, and I’m still finding new things. This is helped along by Bethesda releasing DLCs (downloadable content) which add whole new areas, quests, characters, weapons, armour, plot lines, etc – the three so far are Dawnguard, Hearthfire, and Dragonborn, and there’s more on the way.

Skyrim is of course, beautiful. So beautiful. Sometimes you just switch it on and run around, exploring mountains, forests or ruins, ignoring all your questing and responsibilities (just like real life!). It is a better game if you don’t fast travel anywhere (fast travel = jumping from one city to the next via a menu option), because you get to immerse yourself in the beauty of the world more often. You then run and stumble through the beautifully detailed scenery, and experience random events, like a thief trying to rob you on the highway, a wandering Bard who’ll sing you a song for a Septim, or a group of drunken revellers, who’ll give you free mead when you approach them.

The detail is exquisite. It has stunning graphics, and fantastic music, much like Oblivion, though of course even more realistic owing to the advances in 3D rendering capabilities.

One thing that separates Skyrim from Oblivion is the sense of knowing what’s right or wrong. In Oblivion, there was very clear-cut way of measuring this – because your character earned fame or infamy points, based on how good or bad they were being. This would alter how certain characters behaved around you and so you could become a hero, or a villain.

This doesn’t happen in Skyrim. You still have characters behaving differently to you, based on your choices, but the choices aren’t – ever – as clear-cut right or wrong as they were in Oblivion. It seems like every decision you make in the game has its good and bad repercussions, and nothing is ever black and white. Characters are openly nasty, or sadistic, or larcenous; others are extremely naive and hopeful and idealistic. And many are ‘just folk’; neither good nor bad. While Oblivion was a look at the Imperial City and Cyrodiil in all its prosperous glory, Skyrim is very much a province in the midst of civil war, and the factions (which are barely-organised mercenaries whichever way you look at them), and the majority of non-playable characters (NPCs), and your interactions with them and the world, reflect this.

Skyrim most certainly took control of my life for a time, much to the exasperation of my partner, and to this day, while I force myself to do other things, the dragon is still in the back of my mind, coiled and waiting to spring forward and demand I visit it. Because from the moment I found myself blinking and confused with a newly purchased game in my hand outside the games store, I was Dovakiin, Dragonborn, and there was nothing I could do to stop it. To be honest, I wouldn’t want it any other way.