The (Well, My) Verdict on “Glimpses”

In the early chapters of Lynn Flewelling’s first novel, Luck in the Shadows, wayward protagonist Seregil assesses his new companion Alec and concludes: “The lad was neat-handed, and there was a familiar quickness about him that had little to do with training. And he asked questions.”

Fans, as a general rule, are like Alec (lacking, perhaps, the honey-gold hair and winsome smile): we quickly learn to ignore the dubious ethics of nightrunning, we fall madly in love with Seregil, and we ask questions. Many, many questions.

And lo! Ask and ye shall receive. For Flewelling has heard our questions and responded with answers—in Glimpses, her recently released anthology of Nightrunner stories.

As a longtime fan of Flewelling’s work, I find it difficult to distance myself from the Nightrunner series, and thus to determine how much a newcomer would enjoy the anthology. Despite inside references, I believe it would make sense to a reader unfamiliar with the series. How much that reader would delight in it remains harder to say. If you haven’t obsessed over the mysteries of Alec’s background, will you enjoy a glimpse of how his parents met? If you haven’t squeed over Alec and Seregil’s developing relationship, will you appreciate a glimpse of their first night together? If you haven’t watched Seregil dupe nobles by day and skulk across rooftops by night, will you gape at the glimpse of him as an innocent, troubled young scribe? More questions, and ones I can’t answer for you. Yet I suspect that, if you’re new to the series, Glimpses will provide you with a tantalising rather than off-putting introduction. Plus, it has super purty pictures.

Readers who are familiar with the series might be asking the same question that had me gnawing my knuckles when I began: Can an author return to a long-past stage in her story and write something that convincingly fits there? The collection’s fourth story occurs literally in the line break between two sections at the close of Stalking Darkness, which was written over a decade ago. Is it possible to recapture the mood and tone of a story concluded years ago, let alone the personalities and emotions its characters had at that point?

Never fear, O Fellow Flewelling Fans. Possibly hours of squeeing has cut off the air to my judgment faculties, but I find that the story reads like a deleted scene from Stalking Darkness. Characterisation, setting, and relationships all merge smoothly with their context; no jarring discrepancies assail you. 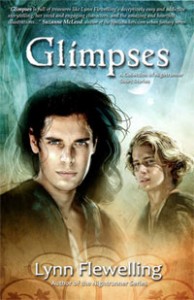 Cover art by Anne Cain. Complete with delicious fanart inside.

Organised into a roughly chronological timeline of character development, the collection begins with the woes of a newly exiled Seregil; passes into cute-as-a-blue-eyed-button Alec’s early childhood (complete with flashbacks to his parents’ doomed love affair); returns to Seregil after he’s left the Skalan court; unites their separate tales with the story of their “first time”; finishes with a playfully humorous extract from upcoming novel The Summer Players. In keeping with the vivid characterisation for which Flewelling is renowned, this setup charts, in enticing bits and pieces, the emotional progress her characters undergo across a broad span of years…Although enough questions remain unanswered to keep us maddeningly teased in the manner to which we’ve become accustomed.

Glimpses provides Nightrunner fans with satisfying answers to some of our many, many questions. However, like all of Flewelling’s work, it also inspires that one question we’ll never stop asking: Can I haz moar, plz?

Luck in the Shadows

(Nightrunner, Vol. 1) and Glimpses: A Collection of Nightrunner Short Stories

are both available now and clicking either of those links will take you straight to the details page on Amazon. If you click from us, you’ll also be helping omg-squee.com out; Amazon will see that we referred you!